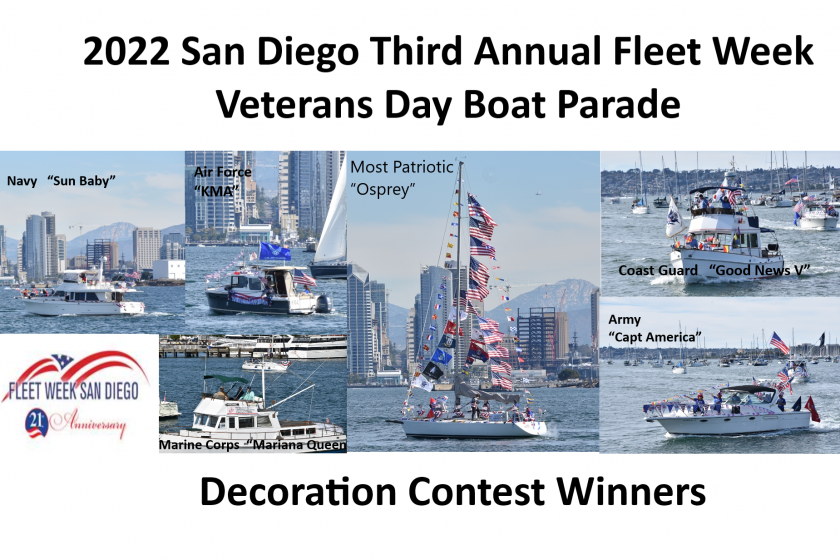 SAN DIEGO – Approximately Forty Pleasure Boats turned out to participate in the Third Annual Veterans Day Boat Parade on Friday 11 November.  The Boats were  decorated in Military and Patriotic themes to honor our Veterans and the members of the military, and competed for trophies to determine the best decorated boats in the following themes: Army, Navy, Air Force, Marine Corps, Coast Guard, and “Most Patriotic”

The Parade started at 12:00 noon at the Southern tip of Shelter Island, and proceeded past Harbor Island to the Embarcadero, passing in front of the Judges Station aboard the Ferry Boat Berkeley at the Maritime Museum, then past the  Broadway Pier, the USS Midway Museum, Seaport Village, and crossed the  channel at Cesar Chavez Pier, then past the Coronado Ferry Landing where the parade disbursed.

The final  event of Fleet Week San Diego 2022 will be the Fleet Week Football  Classic at Snapdragon Stadium on Saturday 12 November featuring SDSU and SJSU.

Fleet Week San Diego is a 501(c) (3) nonprofit foundation created by community and business leaders to honor and celebrate the men and women of the military through public events and alliances that support and thank these heroes.  The Chamber of Commerce gave birth to Fleet Week San Diego in 1997 and by 2001 the event had grown into a nonprofit California Public Benefit Corporation. By expressing its support for the contributions made by the sea services to the many communities of the greater San Diego region, Fleet Week San Diego helps to maintain the vision of San Diego as a patriotic, pro-military city.