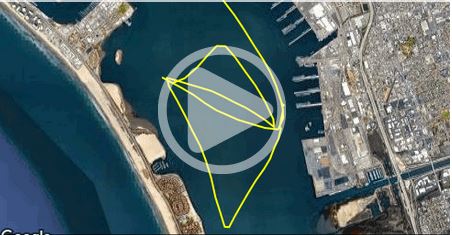 The third Saturday of the month, our race day December 18, 2021, was a prodigious day for sailing.  This was the holiday season so we were not expecting our average number of boats as everyone would be out shopping.  The winter winds had been light again leading up to the weekend race. Wind predictions were for 4-6 knots from the NNW, approximately 300*-310*. The projected course had two downwind legs, so this might be a spinnaker run. With the projected light wind, the smaller boats might have an advantage.  The tide would be low at 3 PM so the current would be ebbing the whole race.

Circling the starting line were 10 boats. There were 3 new boats present, Pau Hana with Todd Borjesson, Aragorn with Mike and Anne Peters and Osprey with Mike Philbrook and his scouts.

WELCOME new boats.  We hope to see you out every month.

Putting all this information into the Mike Collins Handicap System we end up with the following:

Putting all this information into the PHRF Handicapping System we get the following:

8 of 10 racers ran their raceQs.  Go watch the race on South Bay Family Sailing Series December 18 race on the Smart Phone App: raceQs.  Next race can we get 10 out of 10?

We hope to see you all there.