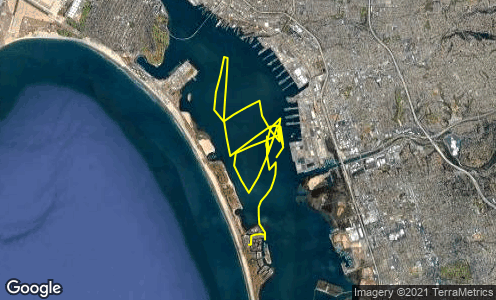 Saturday, September 18, 2021 was a terrific day for sailing.

On this day there were many boating activities throughout San Diego and one of the primary ones was the Beneteau Cup.  During this two day event sponsored by Beneteau San Diego they assign a professional sailor to help each owner sail their boat.  There are two races on Saturday, one race on Sunday with a final awards party at the San Diego Yacht Club.  Many of the boats from our South Bay Family Sailing Series were sure to attend.

For the start of our race the wind was from the NW with white caps just starting to appear for the noon start. No other events were scheduled for the South San Diego Bay, so we had the race course all to ourselves. Winds were predicted to be 7-8 knots, but the actual wind velocity was 12-14 knots.  There were 7 boats circling the starting line.  Off with the first group with the starting horn was Fast Sunday.  Eight minutes later the second group was off and consisting of Serendipity III, Atsa II , Simplicity and Bon Temps.  Finally, the third group consisting Astra and Consigliere were off 15 minutes after the first group.  The captains of the second and third group were all in a quandary regarding their late starting times, 8 minutes, and 15 minutes respectfully as these postponing times had never been used.  Tacking up to the first mark everyone was gaining on the leaders.  On the reach to the second mark everyone was even closer.  At the finish everyone was very close.  Finish times across the line were Consigliere 13:33:15, Bon Temps 13:33:44, Astra 13:36:56, Astra 13:37:15, Serendipity III 13:45:50, Fast Sunday 13:55:00.  Simplicity did not finish the race so there was no time (DNF).

Putting all these times into the Mike Collins Handicap System we get the following: