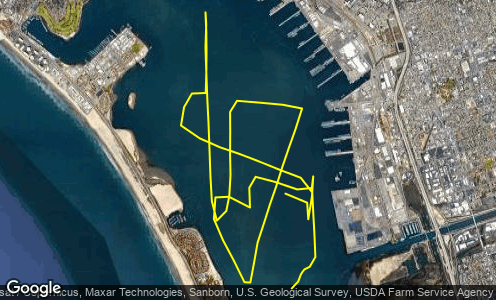 Saturday, May 15, 2021 was an exceptional day for sailing.  The sky was overflowing with navy grey clouds and occasional spots of sunshine as the clouds parted.  The wind was blustery cold from the SW and the temperature was approximately 60* (F).  The direction proved to be from 238* to 240*. The wind velocity was predicted to be 5, 6, 7 knots throughout the race, however as the boats moved out into the South Bay the wind was gusting to 17 knots. Most all the boats decided to put reefs into their mainsails except the 47’ Marilee.  The tide was high at 13:18 with a plus 3.42 ft.  We were the only ones racing in the South San Diego Bay.

10 boats were circling the starting line for the noon start of our May pursuit race.  The first group consisting of KISS, Fast Sunday, and Makai were off with the first horn.  At 12:04  Miller Time III, Astra II and  Bon Temps were off with the second horn.  The final group  Estate Sail, Marilee, Astra and Elusive started with the 12:08 horn.  The winds were still gusting, but calming down to variable 13 to 16 knots.  KISS was leading the pack to the first and into the second mark.  Slowly the groups spread out and the later starting boats began catching the leaders. The 17 knots gusts calmed down and most of the boats shook the reefs out of their mainsails.  The third leg Elusive launched a code 0, or spinnaker and began moving up closing the space on the leaders.  Using the special sail they moved into first place, however, KISS did a great job of holding them off.  Going to B on the 5th leg Elusive seemed to feel sorry for the rest of the fleet and traveled on past it as if going to C.  The fleet really appreciated this good sportsman like gesture and caught up with Elusive.  Realizing their mistake they finally found B and continued on.   Crossing the finish line times are as follows:  Elusive 13:41:45, Marilee 13:51:14, Bon Temps 13:51:35, Astra 13:53:53, KISS 13:57:50, Estate Sail 14:00:34, Atsa II 14:01:40, Makai 14:02:17, Miller Time III 14:17:16, Fast Sunday 14:25:14.

Congratulations all racers.  A fine day for sailing

raceQs was used by 6 of 10 boats.  Wouldn’t it be nice if all boats were using raceQs!!! See raceQs replay HERE

KISS, Makai, Marilee, Miller Time II do you have “Smart Phones”?  Who is “Fired Up”?

Putting the corrected times into the Mike Collins Handicap System the results are:

Placing the corrected times into the PHRF system provided by the app “Race Calculator” we find the following:

The next race is:

We hope to see you all there.  BRING A FRIEND