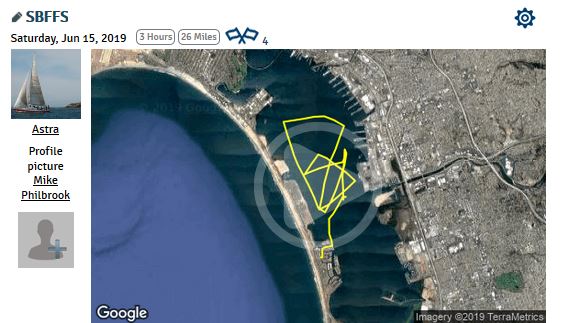 Astra was crewed by Explorer Club 1 this month. See below the official results.

Saturday was a great day for a race.  If you were not there in June, plan on being out on the race course in July.  Here are the results:

Saturday June 15, 2019 was an exceptional day for a sail. Wind was predicted to be a gentle breeze (7-10 knots), but was actually a moderate breeze (11-16 knots).  According to the Beaufort Scale there are “fairly frequent white foam crests”.  Wind was coming from the WNW, or about 290 degrees.  None of the boats had reefs in their sails.  The tide was moving out of the bay and Low Tide was approximately 1400.

Five boats were circling the starting line for the noon horn.  As usual this was a pursuit race with group C starting at 1200, group B at 1203 followed by group C at 1206.  Everyone crossed the starting line close to their starting horn.  Pie in the Sky ended being a little late to the line. At the first mark all the boats were piled up rounding Buoy C.  by the time the boats arrived at Buoy A they were strung out with Phyrxus in the lead.  Phryxus stayed in the lead for most of the race, however on the last leg fell behind to Astra and Bon Temps.  The finish times were as follows:  Astra; 13:38:00, Bon Temps 13:39:03, Phryxus 13:41:37, Bibbity Bobbity Boat; 13:47:37 and Pie in the Sky; 14:15:00.

There was a report from an “unreliable unnamed source” that Marilee, Consigliere, ATSA II, Mal Pais and others were anxious regarding the difficult course and did not want to sail.  The race committee will take this into consideration for next month’s race.

Take a look at raceQs for the race from buoy C to buoy A. Lots of competition!

Putting all this information into the Mike Collins Handicap System the results are as follows:  See online details HERE.

Standings for the top ten boats after the first six races is as follows: