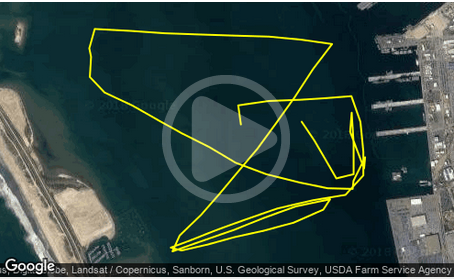 Astra was manned by members of Crew 147 (Greater Los Angeles Area Council) from Monrovia CA sail Astra to a FOURTH place finish out of ten boats.

See a full replay of the race HERE.

Saturday, January 19, 2019 was the best day for sailing we have seen for many months.

It rained on the Wednesday before the race.  Social media was abuzz with discussions about which boats were going to be out on the water for the Saturday race.  If you missed out “shame on you”, you missed a fantastic day.  The skies were clear blue, no clouds on the horizon and the wind was coming up at 1130 to 4 and 5 knots.

Eleven boats were circling the starting line for the noon horn.  The race was going to be a “Pursuit Race” since there are so many boats sailing.  On the water were familiar boats Fast Sunday, Simplicity, Pie in the Sky, Phryxus, Marilee, Gunslinger, Bon Temps, Astra, and ATSA II.  Two new boats were in the mix:  Miller Time III, and Imagine.

Group C was first to cross the start line at noon followed by Group B at 1203 and Group C at 1206.  Fast Sunday was first to cross the starting line while last across the line was Astra. All boats were racing by 1207.  Winds were typical from the NW at about 10 knots. The first mark was crowded with boats of all sizes however, by the second mark the group was spreading out with Marilee leading followed closely by Phryxus, and Astra.

Does anyone know Imagine????  If so please let us know: captain’s name, type and length of boat, email address.

Putting all this into the Mike Collins Handicap System: