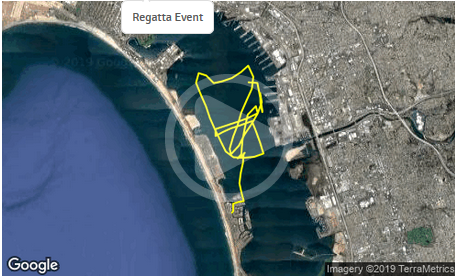 Crew for this month was from Troop 95 from Spring Valley. They finished SECOND out of ten boats!!!!

See a replay of the race here.

Saturday, February 16, 2019 was an excellent day for sailing.  All week long it had been raining and everyone was debating whether it would be dry on Saturday.  The weather person predicted about a 20% chance of rain as the cold front moved off to the east.  Winds were predicted to be 15-18 knots from the NW.  As the sun came up on Saturday there were blue skies with puffy white clouds flying to Arizona.  Sailing out to the starting line for the noon start there was chatter on the radio about how much sail should we set, no reef, one reef, or????  Circling the start it was about evenly matched with half the boats with one reef in the main sail and no reefs.

There ended up being 10 boats at the starting line, Bon Temps, Makai, Madam Wu, ATSA II, Consigliare, Astra, Pie in the Sky, Marilee, Phyrxus, and a new boat “Ran”.

Ran is a Beneteau 423 sailed by Bram Arnold out of the Fiddler’s Cove.

We hope to see you out on the course each month.

The first group crossed the starting line at noon, followed by the second at 12:03 and the third at 12:06.  Most all the boats crossed the starting line coming from the north and were on the starboard tack. Rounding the first mark showed a crowded field with boats from all groups trying to get an advantage.  By the second mark the boats had stretched out so there was freedom to maneuver.  The wind predictions were fairly accurate with winds ranging from 12-15 knots with gust up to 20 knots coming primarily from the WNW.

Congratulations to all sailors!  LOTS of WIND.   Phryxus gave everyone a chance and sailed with just the mainsail and NO jib.  Bon Temps ended up with a broken rope clutch.

Putting all this information into the Collins Handicap Systems the winners are: