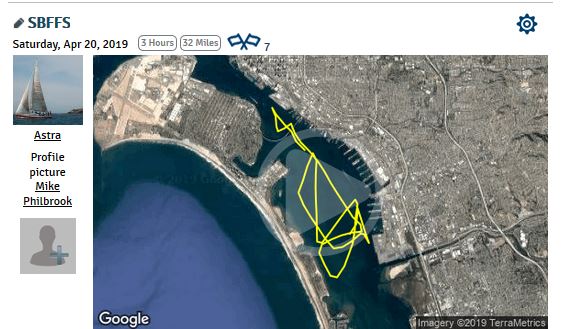 What a GREAT race in April.  If you were not there you should have been.  Here it is:

Saturday, April 20, 2019 was a prodigious day for a sail.  It was predicted by the weather person to be about 70 degrees with partially cloudy skies.  Winds were to be 12-16 knots from the NW. These predictions were close to being correct.  Again, we were the only race in the San Diego South Bay.  CLEAR SAILING!

There were seven boats circling the starting line for the noon start.  The first group started at noon, the second at 1203 and the third group at 1206.  It was a long beat up to A and Pie in the Sky won the honors around the first mark followed closely by Astra, Consigliare, and Phyrxus.  Heading to the second mark these three boats pulled ahead of Pie in the Sky and that was pretty much the race.

A couple unique accounts from this race were the fact that BBBoat raced with only the main sail.  Were they giving the rest of the fleet a chance since they have won so many trophies over the years?  Also, Marilee forgot, or did not raise their sails even after the starting horn.  Were they giving all the other boats a head start, or were they just increasing their handicap???  Next time you see the crew of Marilee, or BBBoat ask them what was going on.

Anyone wishing to compute PHRF results for the race should send the results to me and I will forward it to the rest of the fleet.

We hope to see you all there!  Bring a friend!